Sweden was one of the first countries that recognized the independence of the Republic of Belarus (December 19, 1991). On January 14, 1992, the Agreement on the establishment of diplomatic relations was signed during the visit of the Minister for Foreign Affairs of Sweden, Margaretha af Ugglas, to Belarus.

In 1997 the Minister of Foreign Affairs of Belarus, Ivan Antonovich, visited Stockholm. In 2003 the Belarusian delegation led by the First Deputy Prime Minister, Sergei Sidorsky, paid a visit to Sweden.

Foreign Ministries are developing bilateral dialogue. Since 2015, they have resumed regular consultations. In September 2015, Foreign Ministers of Belarus and Sweden met at the UN Summit in New York. They have since reconvened in this format in 2016, 2017 and 2019.

On March 31 – April 1, 2016 the State Secretary to Minister for Foreign Affairs, Annika Söder, paid a working visit to Belarus.

Belarus has restored diplomatic presence in Sweden in November 2016.

On January 14, 2017 the Foreign Ministers exchanged congratulatory messages on the occasion of the 25th anniversary of the establishment of diplomatic relations between Belarus and Sweden.

In October 2017, the new Ambassador of Sweden, Christina Johannesson, presented her credentials to the President of the Republic of Belarus.

In November 2017, Stockholm hosted consultations between the Foreign Ministries of Belarus and Sweden. The Belarusian delegation was headed by the Deputy Foreign Minister, Oleg Kravchenko, the Swedish – by the State Secretary to Minister for Foreign Affairs, Annika Söder. During the visit, Oleg Kravchenko also met with the Speaker of the Riksdag, Urban Alin. 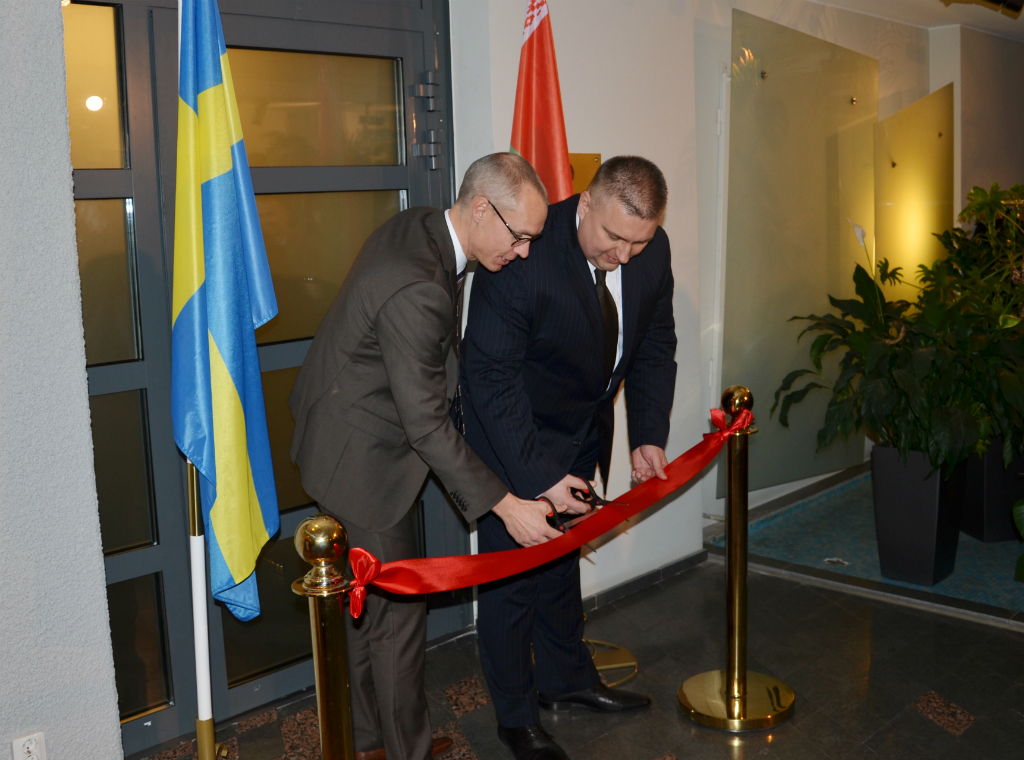 On November 15, 2017, the official opening ceremony of the Embassy of the Republic of Belarus in the Kingdom of Sweden was held with the participation of the Deputy Foreign Minister of Belarus, Oleg Kravchenko, and the State Secretary to the Minister for EU Affairs and Trade of Sweden, Oscar Stenström.

In February 2018, on the sidelines of the Munich Security Conference the Foreign Minister of Belarus, Vladimir Makei, met with the State Secretary to Minister for Foreign Affairs, Annika Söder.

In March 2018, a delegation of the Swedish Foreign Ministry headed by Deputy Director-General and Head of Department for Eastern Europe and Central Asia, Ambassador Andreas von Beckerath, visited Minsk.

In April 2018, the Deputy Foreign Minister, Oleg Kravchenko, met with the State Secretary to the Minister for EU Affairs and Trade, Oskar Stenström, in Minsk.

On June 11-13, 2018 the Deputy Foreign Minister, Oleg Kravchenko, visited Stockholm and took part in the international conference “Managing complexity: Addressing societal security challenges in the Baltic Sea region” co-hosted by the Stockholm International Peace Research Institute (SIPRI) and the Ministry for Foreign Affairs of Sweden. During the visit to Sweden, the Deputy Head of the Belarusian Foreign Ministry also met with the Speaker of the Swedish Parliament, Urban Ahlin, and the State Secretary to Minister for Foreign Affairs, Annika Söder. On June 14, 2018 the Ambassador Extraordinary and Plenipotentiary of the Republic of Belarus to the Kingdom of Sweden, Dmitry Mironchik, presented his Letters of Credence to the King of Sweden, Carl XVI Gustaf. Thus, after a six-year pause, Minsk and Stockholm have resumed mutual diplomatic presence at the level of ambassadors. Reopening of the embassies set in motion bilateral relations in all spheres. For example, in May 2019 the Belarusian delegation headed by the Minister of Natural Resources and Environmental Protection, Andrei Khudyk, payed a working visit to Sweden. Mr. Khudyk met with the Deputy Prime Minister – Minister of Environment and Climate, Isabella Lövin. The heads of the environmental protection agencies of the two countries agreed to step up cooperation in environmental protection and climate change mitigation. On December 9-10, 2019 the Minister of Transport and Communications of Belarus, Aleksei Avramenko, visited Sweden and met with the Minister of Infrastructure of Sweden, Tomas Eneroth.

On November 5-6, 2019 the high-level events on the occasion of the 10th Anniversary of the Eastern Partnership (EaP) were held in Stockholm. The Minister of Foreign Affairs of Belarus, Vladimir Makei, paid a visit to Sweden to participate in the High-Level Meeting and to meet with his Swedish counterpart and with the Speaker of the Riksdag. Within the framework of the events in Stockholm Belarus’ national coordinator for reaching the SDGs, Marianna Shchetkina, met with the Minister for International Development Cooperation, Peter Ericsson. Two members of the House of Representatives of the National Assembly of the Republic of Belarus participated in the parliamentary component of the high-level events. On February 19-20, 2020 the Belarusian delegation headed by the Deputy Minister of Transport and Communications, Andrei Ivanov, took part in the 3rd Global Ministerial Conference on Road Safety in Stockholm. On the sidelines of the conference, Andrei Ivanov met with his colleagues from Sweden and Latvia to discuss joint logistic projects.

On April 2, 2020 upon the initiative of the Swedish side, the Minister of Foreign Affairs of Belarus, Vladimir Makei, had a telephone conversation with the Minister for Foreign Affairs of Sweden, Ann Linde. The Ministers considered a number of issues linked to the promotion of bilateral relations. They emphasized the importance of solidary approaches and joint efforts in combating the spread of COVID-19. During the conversation, Ann Linde thanked her Belarusian counterpart, as well as BELAVIA – Belarusian Airlines and the staff of the Ministry of Foreign Affairs of Belarus for the help in returning home more than 70 Swedish citizens from Turkey.

On August 18, 2020 upon the initiative of the Swedish side, the Minister of Foreign Affairs of Belarus, Vladimir Makei, had a telephone conversation with the head of the Foreign Ministry of Sweden, Ann Linde. Interlocutors exchanged views on the development of post-election situation in and around Belarus.

Sweden's approaches to the development of political dialogue with Belarus are currently defined in line with the European Union's common position on Belarus. Stockholm supported the introduction of sanctions against Belarus in 2020.